Metadata for SW GTL Generator tool can be stored on any existing database server, there is no need to have dedicated database server.
GTL Application Generator runs locally on the PC, where must be installed client tools IPC and MS Visio. The application requires access to the repository via IPC client tools (command line tool pmrep.exe).

Input layer contains data for each model version. For application full functionality internal data processing has to be made in DS data function.

WRK – working data are processed internally by generator and supports:

Working data are in fact data structures and other metadata that depends on the selected operating mode. There are two types of working mode:

Screenshot in operating mode FULL with a list of new or changed tables.

Sources and targets are directly generated IPC objects. Generator on the selected operating mode base:

Transformation is a logically grouped set of templates and includes templates for workflow, mapping, session or parameter file. Template is created from object exported from IPC (mapping, session, workflow). Template type matches type of the exported object. Template definition it is possible to define as following sequence of steps:

Screenshot with selection and definition of parameterized attributes in template. 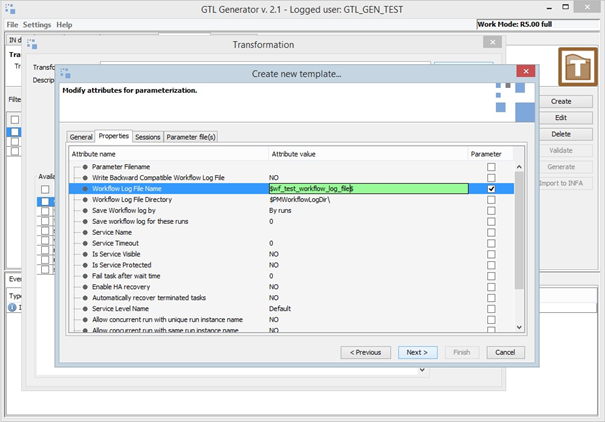 A prerequisite for object generating is Import of values for the parameters in the template. There are two ways to import metadata:

Example of the text file with parameter values.

Export is an operation that can be used in case of once imported file correction or can help to create a file for a different template, but with similar parameters.

Generating objects is the final operation and uses two options:

Text templates use Apache Velocity technology integrated in the application. Templates can be used for example in SQL queries in ETL transformations. There are usually the same SQL queries /scripts with differences only in the names of tables, columns list, joining conditions etc. Such SQL queries can be parameterized and then generated. 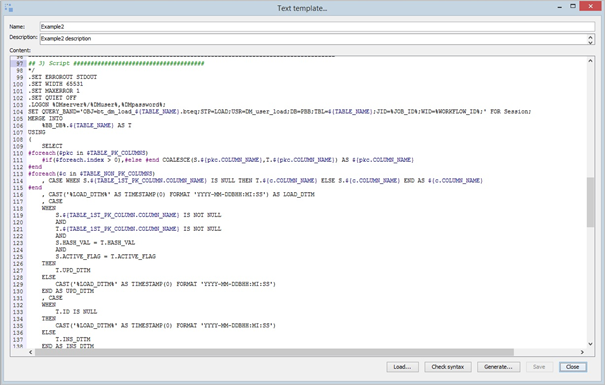