A job scheduling tool for massively parallel processing designed for heterogeneous data warehouse environments. It is built over a Java application server. Process management in GTL Scheduler is based on the definition of dependencies between tasks and resources (for example, locks, files, spreadsheets, etc.). Tasks are launched as soon as their dependencies on other tasks and objects are fulfilled. Specific arrangement and parallelisation size are left to the tool responsible for the process control. User interface as a web application use different user roles and allows daily data processing monitoring and administration.

One of the primary goal of globtech scheduler is to provide maximum flexibility to organization of jobs. We have chosen simple but powerful kind of organization – dependency graph. A dependency graph is composed of objects like job, lock or connector and dependencies among them. Two jobs can be synchronized using predecessor-successor dependency. If this kind of dependency is not sufficient lock can be used. Lock is typically used as an abstraction for table, file etc. to assure restricted access of jobs to a resource. Access can be fully exclusive or shared with limited number of actual users. Connector is another type of object, which is used by jobs to access target environments like databases or file systems. As for locks, connectors can be restricted for concurrent access as well.

Dependency graph has many advantages over other organizations like tree organization or workflow. Above all they are:

Job processing based on dependency graph allows maximum parallelism, which can be used for various methods of scheduling. The simplest one that is used in scheduler is scheduling by priorities. But more important method for processing of big graphs of jobs is scheduling based on statistics of previous job executions. Goal of this scheduling method is to prefer jobs from critical paths and thus complete the whole execution in the least possible time, which is crucial requirement for etl processing.
Another criterion of job scheduling, which is orthogonal to the previous ones, is load-balancing. Load-balancing constrains the job selection by keeping maximum acceptable level of target environment load not exceeded. For better estimate of expected load during job execution collecting of statistics of previous executions are helpful. Load-balancing is important in effective job scheduler because even small exceeding of server resources (typically it is memory) can significantly prolong the execution time of the job processing. Shortage of free memory causes swapping of memory pages. Similarly overloaded data cache in database server causes lots of page misses. Both examples increase number of i/o read and write disk operations, which are very time expensive. 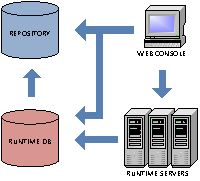 One of the powerful features of scheduler is extendible type system. Existing types of jobs (or other objects, e.g. lock) can be reused to create derived user defined types, which can predefine common attributes or override general attributes like command with an expression composing the value from more user friendly attributes. For example a user want to use a command line utility which has non-transparent options that are hardly to remember. Furthermore, many options remain unchanged for most of the jobs. In scheduler user can create new job type for this command line utility derived from system job. This new type will introduce new attributes one attribute for for each command line option that is expected to be used. Then the type will override attribute command with predefined path to the executable file of the utility and will also override attribute arguments with an expression that will compose command line arguments from the new options attributes. Jobs derived from this new type define only the necessary attributes and leave all the command line utility specialties on the derived job type.

Scheduler user interface allows access in three different roles: superuser, administrator, operator and common user. Administrator is responsible for metadata administration, i.e. objects definitions. Runtime data is not allowed to be edited for administrator. On contrary, operator is responsible for runtime state of jobs, resources and runtime servers. That is why operator is allowed to modify (using predefined operation actions) runtime data and thus react on incidents. For example he is allowed to solve unpredicted job failures by restart or resolve, he can block temporarily set of jobs, target environments or stop runtime servers. But operator is not able to modify metadata, which are accessible to operator for reading only. Role user is for the other users of scheduler that are allowed only to see data but are not allowed to modify them however. Role superuser merges administrator and operator roles. These roles are also applied on database level i.e. for db api access.

Console is designed and optimized for browsing and editing of dependency graphs containing big number of objects and dependencies. That is why we generally use tables for browsing data. In object details it is possible to find all direct dependencies and quickly navigate to them using hyperlinks. For another way to browse hierarchy we use tree. Objects in tables can be filtered and sorted.

Browsing and editing objects in console 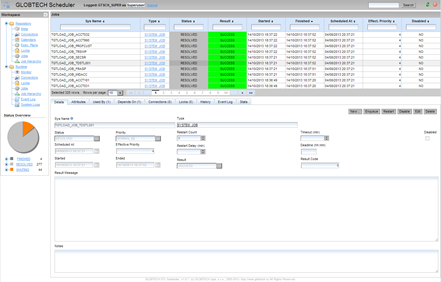 For bulk operations on jobs (e.g. restart, spool) there are specially design dialogs that helps to effectively select set of jobs with some properties. Upper table is used for browsing jobs in hierarchy towards predecessors of selected root job or towards its successors. Alternatively jobs can be listed without hierarchy. Jobs in the table can be filtered, sorted and then selected. Actual selection of jobs is shown in the lower table. When all required jobs are selected user can set up additional parameters of operation and confirm the operation. All modifications are processed in one database transaction. 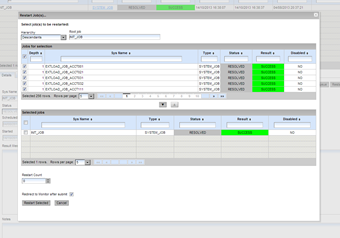 Jobs and runtime server(s) generate lots of files e.g. system log file, standard output of system jobs or informatica log files. Console provides remote access to this files. User is able to browse them, sort, filter them or download them to local computer.

UI interface can be customized on three levels: